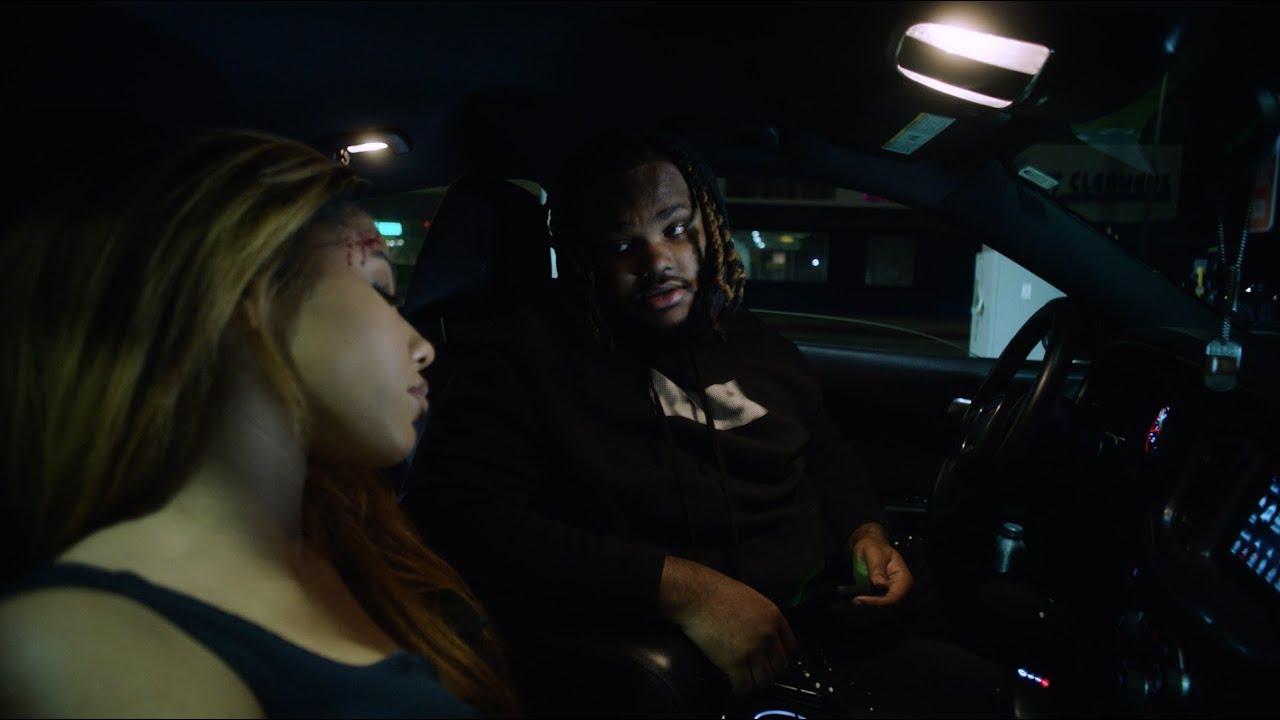 DJ on the beat, so it’s a banger

I pulled up, thought it was him and hit that boy in his dome
She like, “Listen Tee, I swear, I ain’t do nothing wrong”
I’m like, “Listen, I know, but it’s somebody that you know that gotta go” (Ayy)
Walking out her shit, she see the body, get to screaming (Ah)
Smack her in the head with the gun, she get to bleeding (Fuck up)

Tryna avoid the neighbors, they might be on some policе shit
I tell her, “Drive,” shе like, “Boy, I’m bleeding, I can’t see shit” (Damn)
She in the the passenger, I got that bitch on child lock (Can’t get out)
I’m racing out her complex ’cause now her spot too hot (Skrrt)
Thinking to myself like “Damn, I’m movin’ way too fast” (Slow down)
She like, “Please tell me what I did that made you mad”

(I’m ’bout to tell you right now)
I pulled up dawg picture (Look at this)
I’m like, “Tell me everything you know about this nigga” (Right now)
She seen his face and her eyes got bigger (Wassup?)
She like, “He be shooting shit and all his people killers” (I don’t give a fuck)
“He took me to his house, one time on Grand River” (Okay)

“I’ll give you the address, just don’t kill me, I got children” (What?)
This bitch wasn’t thinkin’ ’bout them kids when she was strippin’ (At all)
I can’t kill this bitch until she bring me to this nigga (At all)
I’m kidnappin’ you but being around me, still a privilege (Bitch)
She do something foul, she out the game, this ain’t no scrimmage (Bow)
I check the tank, damn, we need gas (Need gas)

And a first aid kit ’cause this bitch bleeding bad (Put some pressure on that)
I pull up to the Shell, my heart beatin’ fast (Beatin’ fast)
I told her if she make a move, that’s gon’ be her last (Bow)
I got her phone, dawg calling, I’m like “Ayy bitch, answer this”
“Swear you better not panic, bitch, pick up and talk that sexy shit”

She respond, “I’m with my people” (Just a couple of us)
He like, “Pull up on the block, I’m with the gang” (I’m with the gang, bitch)
We ride past, it’s twenty niggas, he got on my chain (What the fuck dawg?)
He call her phone like, “It’s a nigga in the car, bitch, I just seen him” (I saw him)
“Don’t ride up this fuckin’ block again or we gon’ beam him”

I snatched the phone and I’m like, “Bitch I’m killing all you niggas” (Smokin’ all you niggas)
He like, “You know where we at, pussy, fall through, nigga” (Aight, bet nigga)
I’m like, “Bet”, hit the hood, grab the bros, grab the Teks (Grab ’em)
Extra clips, couple vests (Let’s go), niggas dying on the set
They think they don’t bleed

Can’t believe how he was was talking (You heard that nigga?)
I don’t even want the chain back, put it in his coffin nigga
Ayy, kick the bitch up out the car
I’ll kill her tomorrow (Yeah)
But I play it like it’s cool, gave her ten racks, said “I’m sorry” (My bad)
Pull up in they hood, ’bout to tear they fucking block up (Bow)

Park around the corner, hop out, jump and gave twin choppers (Let’s go)
They still out here like we wasn’t comin’, I do not lie (Fuck them niggas)
They got hoes with ’em, niggas die for thinking what they copped (Boom, boom)
Bro pop out the bushes and let shots fly (Boom, boom, boom)
I see doggy with my chain and let the chop’ rock (Bow, bow)
I see car alarms going off and niggas droppin’ (Niggas droppin’)

I run up on dude with my chain like, “Bitch, what’s popping?” (Bitch wassup?)
Yeah, stood over that boy, looked in his eyes, emptied the gun (Bow, bow)
Sirens goin’ off, we outta here, bro, ditch the guns (We gone)
Month later, police chargin’ me with homis’ (What?)
I know my niggas ain’t say shit, them niggas solid (Them niggas solid)
Ain’t no witness or no guns, we goin’ to trial (We goin’ to trial)

The lawyer say it’s looking good, I’m gettin’ out (I’m out this bitch)
We finally get in court, the prosecutor talkin’ foul (Huh?)
She say the stripper bitch had cameras on her house (What?)
I ain’t even see them bitches, I’m like, “How?” (That’s crazy)
I stood up in court, like “Bitch, I should’ve laid you down” (Bow)