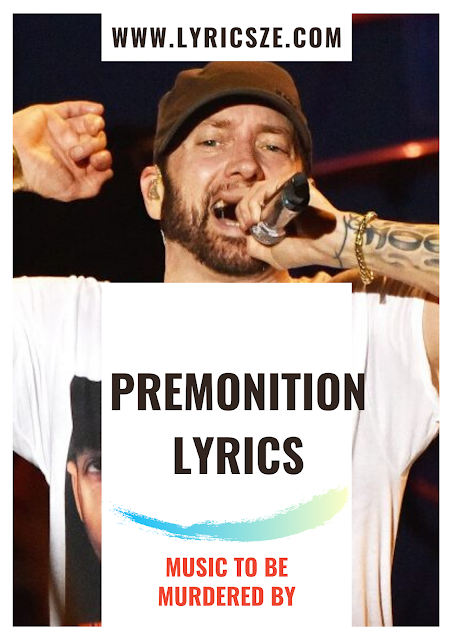 Yeah
So I guess this is what it is, huh?
Think it’s obvious
We ain’t never gonna see eye to eye
It’s funny
As much as I hate you
I need you
This is music to be murdered by
Got a premonition
I feel the end is near
The beauty starts to fade
The joy has turned to pain
I hear the symphony playin’
Ten thousand violins
Souls floating away like feathers in the wind
They said my last album I sounded bitter
No, I sound like a spitter
Who ninety percent of
These hypocrites are tryna get rid of
But why would I get a chip on my shoulder?
I was considered, one time, as the illest
Bitch, I’m still as fly as your zipper
True, I just get richer
But if it was ever all about skrilla
Then I woulda quit a long motherfucking time ago
Bitch, shut the fuck up
I should go say that shit to Tech N9ne or the Jigga
Nobody said shit about 2 Chainz as long as he’s been here, shit
No wonder you’re mad, now I’m
Looking at them plaques, count ’em (Yeah)
I’m L. L. Cool J, bigger and deafer, that’s how come (Uh)
I sell like four mill when I put out a bad album (What?)
Revival flopped, came back and I scared the crap out ’em
But Rolling Stone stars, I get two and a half outta
Five, and I’ll laugh out loud
‘Cause that’s what they gave bad back in the day
Which actually made me not feel as bad now, ’cause
If it happened to James
It can happen to Shady
They do the same shit to Brady
More people hate me than love me
This game will make you go crazy
‘Bout to go for B-R-O-K-E
I was the G, the O-A-T
Once I was played in rotation
At every radio station
They said I’m lyrically amazing
But I have nothing to say
But then when I put out Revival and I had something to say
They said that they hated, they awake me
I lose the rage, I’m too tame
I get it back, they say I’m too angry
I need to get me some Dre beats
No, I should hook up with Tay Keith
Fans keep on pulling me one way
Haters pull me in another
Got more hooks in me than Swae Lee
‘Bout to pick up some weights and lift ’til my tattoo of Hailie’s face stretches
They said I’m just a whiner, I sound like a baby
I dish it out but can’t take it
But I take it, dish it back out
And they get all bent out of shape
This shit’s almost comical
Wait, and I meant no disrespect
I wasn’t dissin’ Tech, that was not a shot at 2 Chainz or to Jay-Z
They probably feel the same way because lately
Instead of us being credited for longevity
And being able to keep it up for this long at this level, we
Get told we’ll never be what we were
Bitch, if I was as half as good as I was
I’m still twice as good as you’ll ever be
Only way that you’re ahead of me’s alphabetically
‘Cause if you diss me I’m coming after you like the letter V
Killing everything, play this tune, it’s your eulogy
It’s your funeral, prepare to die
This is music for you to be murdered by…