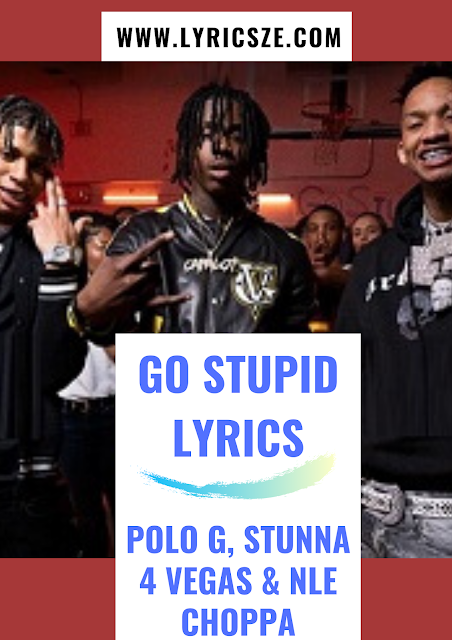 Tay Keith, fuck these niggas up


Hit this jug by the school, couldn’t wait ’til I got out of class

Used to stare at the clock and shit

Before all of this rap shit, I was gangbangin’

And doin’ highspeeds on the cops and shit

And I’m straight from the Chi’, but I ball like king

Keep applyin’ the pressure, I go on the run

And it ain’t no lettin’ it up, ain’t no stoppin’ this

Had to tell my little brother to chill, gotta stay in the house

Come outside, he be poppin’ shit

You ain’t heard about us, well you need to go watch the news

Niggas know we be dropping shit

Got the feds on my ass in the hood

They say my last tape was a classic, but I got some hotter shit (Hotter shit)

Might be rocking a show, if I’m not up the stu’, then I’m fucking this cash out

Don’t you know Polo G? Skinny, tall, with the dreads

That lil’ nigga be rappin’ his ass off

Yeah, I heard she got surgery

Tried to throw us some bullets, but we made them fumble

Now you ain’t getting that pass out

Hit the gas like we racin’, speed off in them foreigns

And leave tire marks on the asphalt

It’s gonna be R.I.P. once your ass caught

Another day, another chain, or a mac bowl

All this ice got me freezin’ like Jack Frost (4X)


That boy a bitch, that’s his dad fault

If you play then you late, we can crash out (Let’s go)

When I’m up in his shit, bet his man down (Ooh)

D.O.A., bitch I catch your man off

A rockstar from the block, I stand out

Came from nothing, I fought my advance off

When I hit the game with my floor niggas, ran out, fuck it (No, cap)

I’m not your average Joe

When I leave the house, I tuck it

I’m rich, I don’t shop with no budget, he clutchin’

My little youngin want him a bucket

I hop on his bitch and run it (Uh)

These lil’ niggas never rob nobody

Ain’t caught nobody, and ain’t getting no money (Cap)

Where I’m from, it’s sport to gunplay

We adopt to the killer and dealers

But even them niggas won’t make it out one day

I pop my first Xan I been had hood fame (Yeah)

I’m a star, but still post on the runway (NLE)

We let them descent like the choir on Sunday

Hop on this scene and I’m thuggin’

Catch me an opp, I’ma down him in public

Know where I grew up, man, a nigga was rugged

Why the fuck you got a gun? You not gonna bust it

And the hundred round shots, I ain’t doin’ no tussin’

But I love wrappin’ them bodies and shit

Fucked the bitch, and when I get done

I’ma up my Glock and then rob the bitch

Catch a nigga when he clock out

I’ma get him wacked at his job and shit

And I dont know why the police keep fucking with me

‘Cause they ain’t stoppin shit, yeah

Shoot him in the face, get his teeth licked

Scratch an opp off the checklist

I just bought a gun off Craiglist

Shoot and opp in the brain, I’m leavin’ the stain

Only thing you see is red shit

If the police behind, we keep duckin’

My gun need some drawers, he got nuts

If a nigga need play, he gon’ get bust, yeah